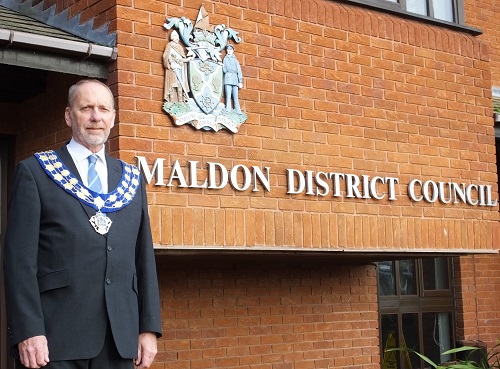 “I wouldn’t want to (nor could I) compete with any of our brilliant local historians but I have always been somewhat intrigued by Maldon’s long historical and Royal connections. Being a former Maldon Town Mayor in 2015, and now District Chairman, has given me the opportunity to briefly revisit this subject. For instance, we don’t make much of the fact that we were a “Royal place” from Saxon Times (when King Edward the Elder built a fort here). That was the case until the Local Government re-organisation in 1974, when, what had evolved into the ‘Royal’ (Chartered in 1171) Borough - Maldon Rural District and Burnham-on-Crouch Urban District - joined and became Maldon District Council as one of 14 new Essex Districts.

“I feel that ‘Former Royal Borough’ could be emphasized on the Town Council’s letters and other communiqués (as it appears on the Town boundary signs). It is a distinction that we should be proud of - especially as we and Colchester were the only two Essex Royal Boroughs in the Domesday survey of 1085/86.

“I’m sure a good friend of mine, former Maldon District Council Chairman Robert J. S. Long M.B.E would agree, as I know that the town’s boundary signs were designed by him. He spent nearly 18 months arguing with the Ministry of Transport, their civil servants and the Minister who refused to allow The Town and Former Royal Borough on the signs. “Too much lettering!” they insisted, but eventually the town and the signs were allowed some 9 years ago. I know they are now in the right place too, thanks to another good friend of mine, former Mayor, fellow Councillor, and local historian Stephen P. Nunn who identified the correct positioning from the 1171 Charter.

“As I think of other examples of the strong Royal and English History connections with towns and villages in and around our District, I think that we could make more of them as other places in England do. For example, according to the Domesday Book, Burnham-on-Crouch was held by a Saxon thegn (a term commonly applied to aristocratic retainers of a king or senior nobleman) called Alward and 10 free men. After the Conquest it was acquired by a Norman called Tedric Pointel of Coggeshall whose overlord was Ralph Baynard. Burnham has since greatly benefited from its location on the coast – first as a ferry port, later as a fishing port known for its oyster beds and most recently as a centre for yachting.

“So, there you are! Thanks for reading this far and indulging me. You never know, keep an eagle eye out for any local Royal connections, it might cheer us all up a little!